Taking a short break from all the MSC planning to play a few shows with my pal Andy Roberts.
A mix of solo & Plainsong material.
Gonna be fun and a nice distraction
Books and box sets on sale. What more can you ask.

Matthews Southern Comfort – The New Mine

Iain Matthews is probably the finest British exponent of the ‘Americana’ musical genre.  Ever since his departure from Fairport Convention in 1969, it is an avenue that he has explored to great effect if, perhaps, only sporadically achieving the success and recognition that his talent and perseverance so richly deserves.  Of course, from the early 1970s until the dawn of the current millennium, Iain was based in the US, where he was able to hone his songwriting and interpretational skills, catching the attention of such influential figure as Michael Nesmith and The Eagles.

Those readers familiar with the name Matthews Southern Comfort will no doubt recall that the band’s most high-profile moment occurred when they occupied the Number One position in the UK singles chart for a period of 3 weeks in October 1970 with their version of Joni Mitchell’s Woodstock. Although fairly typical of the band’s country-flavoured, pedal-steel driven melodic rock music, Woodstock was by no means the only outstanding example of the band’s repertoire and they were responsible for two excellent albums, Second Spring and Later That Same Year, both released in 1970, and both well worth a listen (neither have aged a day!)

Iain left Matthews Southern Comfort in 1971 and the name of the band lay dormant until it was revived in 2010 when Iain, backed by a group of top-notch Dutch musicians (he relocated from the US to The Netherlands in 2000) released the Kind Of New album under the old name.  The New Mine is the fourth Matthews Southern Comfort album since the name was revived and Iain has enlisted the services of Bart Jan Baartmans (acoustic, electric and resonator guitars, mandolin, sitar, bass and banjo), Bart de Win (acoustic and electric pianos, accordion and backing vocals) and Eric De Vries (acoustic guitar and vocals) to deliver an album which expertly and entertainingly travels the path from British Folk Rock to full-blown Americana.

The choice of musicians and instruments is inspired.  The band gel perfectly together, both in the construction and delivery of the songs and in the compositional collaborations that dominate the album.  Compositional credits cover several combinations of the band’s personnel, with Iain Matthews linking with each in turn to produce some excellent songs.  Notable amongst these collaborations are C’mon Amigo, a song by Iain and Eric which contains some marvellous vocal harmonies and would be worthy of inclusion on any Eagles album; The Hole is a Matthews/de Win effort that makes scary references to the destruction of the ozone layer and its growing consequences for the planet and In My Next Life, composed by Bart Jan Baartmans and Iain, offers shrewd philosophical tips to anyone fortunate enough to relive their life applying the experiences that they have gathered.

The album opens with a version of the Joni Mitchell song, “Ethiopia” (from her 1985 Dog Eat Dog album).  This is, perhaps, appropriate, given the long association in the minds of many people between Joni and Matthews Southern Comfort.  The version on this album is sublime with sprinklings of piano and some tasteful guitar work which both set the tone for the musical treats to come.  Sadly, the subject matter of the song – the plight of the people in the African deserts and the indifference of the West, remains as current as it was when the song was written, which provides all the justification necessary for reviving the song.

Of Iain’s solo compositions, my highlight is Starvation Box; a story of an itinerant musician which builds excitingly and which contains some wonderful slide guitar work.

Some may question the relevance of crediting this, albeit tremendous, album to Matthews Southern Comfort; after all, the only constant thread between the outfit that operated in the early 1970s and the band on The New Mine is Iain Matthews.  I would, however, strongly challenge this view.  The personnel may be different but the sound and intent of the band pick up precisely where the original band left off, even to the extent that Gordon Huntley’s missing pedal steel licks that were so much a feature of the 1970 incarnation are precisely replicated by Bart Jan Baartman’s guitar.  Happily, also, Iain’s melodic voice is not only as good as ever, it is enhanced by the vocal support of Bart de Win and Eric De Vries.  The New Mine is very definitely a Matthews Southern Comfort masterpiece.

Matthews Southern Comfort will be appearing at Fairport’s Cropredy Convention during the afternoon of Saturday 15 August.  I, for one, can’t wait! 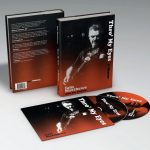 Iain will be signing copies of his memoirs, ” Thro’ my eyes”  on all three days of the festival this year.

Iain will be playing 4 shows in Norway between August 17/20th.  Most of the shows will be with members of the famous Norwegien band The Salmon Smokers.